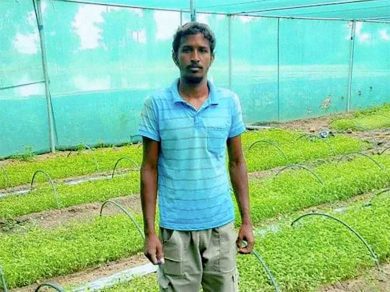 A Case Study in Why Sustainable Farming Matters

VOICE Trust has been promoting sustainable farming techniques for more than 20 years. John’s story is one example how it help both farmers and the planet.

John’s five-acre farm in Magilambādi, Tamil Nadu, has been in his family for generations. But his father, and his grandfather before him, always had to work as a teacher to supplement the farm income.

After his father’s death, John gave up his career in Mechanical Engineering to devote himself to turning the farm into a self-supporting enterprise. He is passionately commitment to sustainable organic farming in general and the use of native non-GMO seeds in particular

While genetically modified seeds (GMO) produce higher yields, they are sterile and costly to purchase each year. On the other hand, using native plants and preserving the seeds they produce promotes the growth of unique variants which can better fight diseases and adapt to the local environment over time.  This genetic diversity creates plants that ripen at different times, allowing for a staggered harvest that minimizes waste and increases selling time. As an added benefit, these native seeds are generally tastier and more nutritious and tasty than their GM counterparts.

Now, with VOICE Trust’s support, he has expanded his repertoire of sustainable practices:  he is using earthworms to convert organic household scraps and field waste into a rich compost Vermicomposting is a cheap, chemical-free way to produce a regular supply of fertilizer that will increase the abundance and nutritional value of his crops.

Like other farmers in Tamil Nadu, John has seen his markets shrink during the pandemic.  But because he is able to sustainably produce his own seeds, fertilizer, and pest repellent, his income has not been suffered as much as those who have to pay premium prices for artificially produced versions of these product.

Every farmer’s situation is different, and each requires a unique solution.  A donation to support continuing COVID Recovery for Tamil Farmers will allow them to buy whatever they need most to make their farm thrive.

A customizable modal perfect for newsletters.
Go to Appearance > Customize > Subscribe Pop-up to set this up.